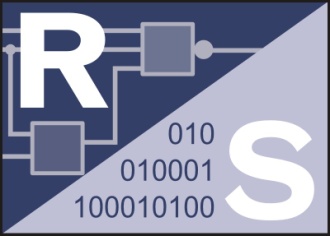 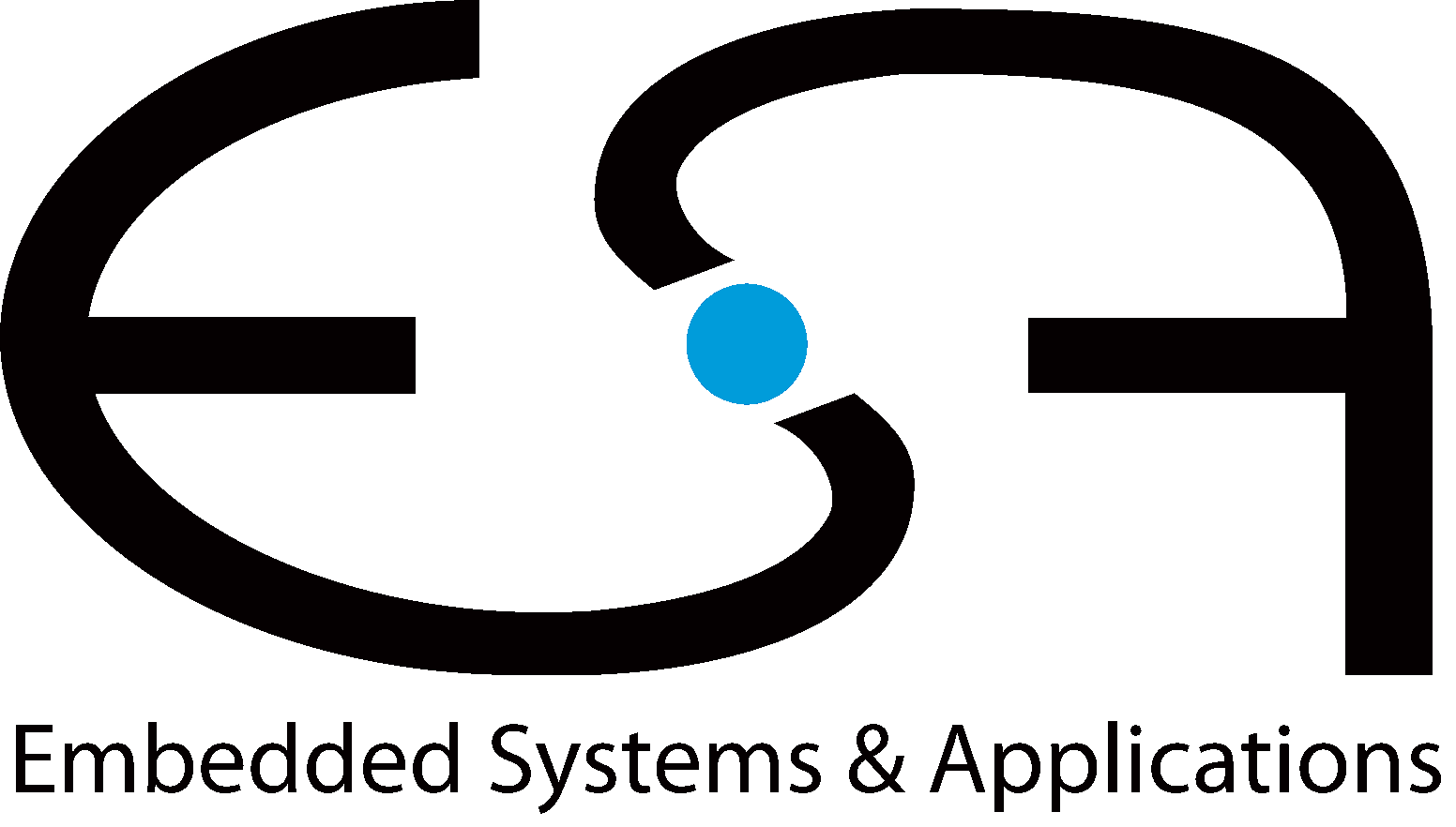 City of Science or Centre of Culture? Darmstadt is both. Like almost no other city, it combines an appreciation of the arts with a passion for science and innovation. Darmstadt still has the charm of a royal capital – at the same time it is a modern city, a laboratory for cultural as well as scientific experiments. This page introduces a few interesting spots. More information can be found here. 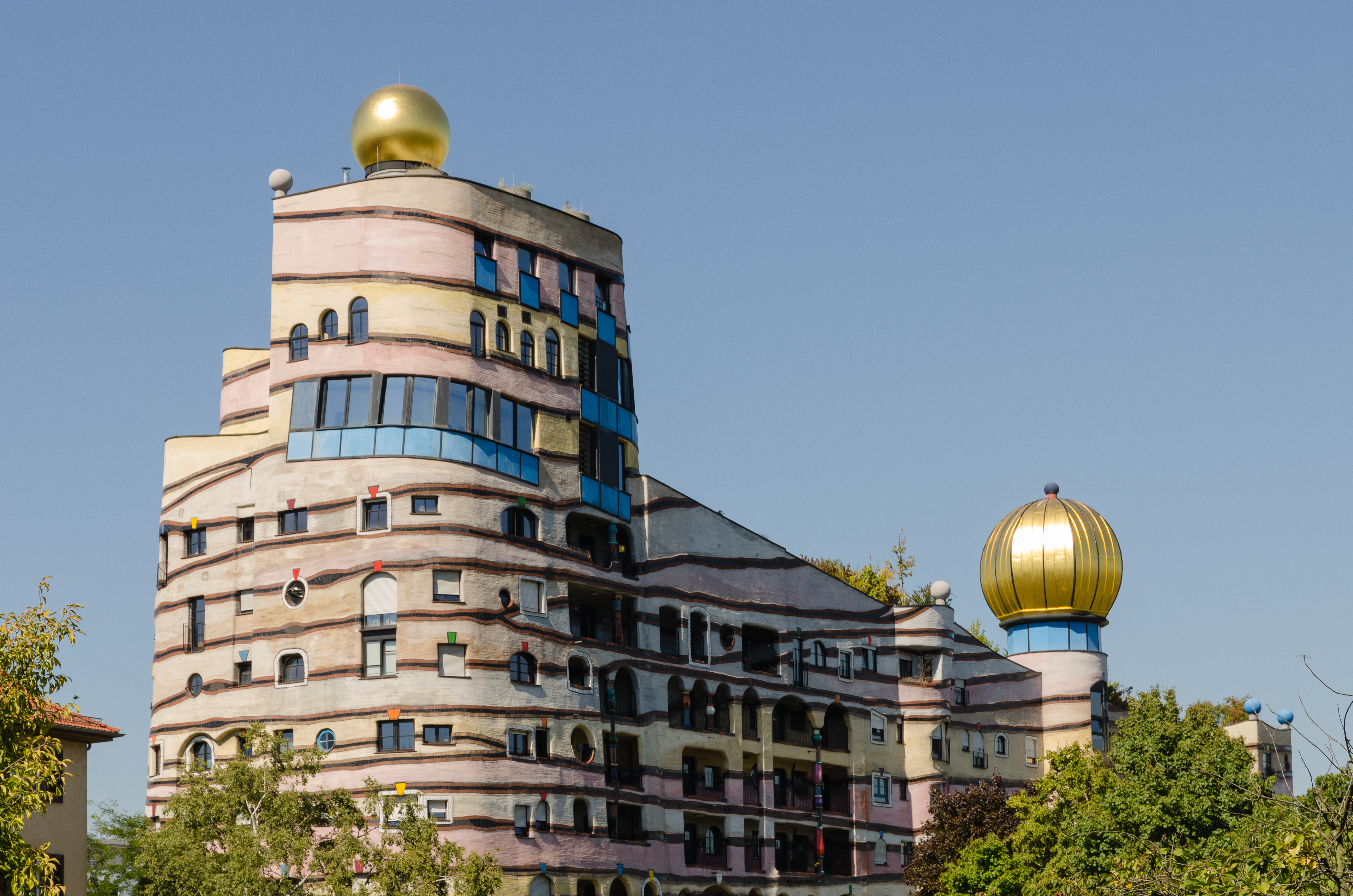 The Waldspirale is a residential building complex built in the 1990s. The name translates into English as forest spiral, reflecting both the general plan of the building and the fact that it has a green roof. It was designed by Austrian artist Friedensreich Hundertwasser, planned and implemented by architect Heinz M. Springmann, and constructed by the Bauverein Darmstadt company. The building was completed in 2000. The Waldspirale apartment building is located in Darmstadt's Bürgerparkviertel. It contains 105 apartments and a parking garage. The inner courtyard contains a playground for the children of the residents and a small artificial lake. Peculiarities of the U-shaped building are the unique facade, which does not follow a regular grid organization, and the windows, which appear as if they were dancing out of line everywhere different and appearing out of order, often with 'tree tenants' - trees growing out from the windows. The diagonal roof, planted with grass, shrubs, flowers and trees, rises like a ramp along the U-form. At its highest point, the building has 12 floors. 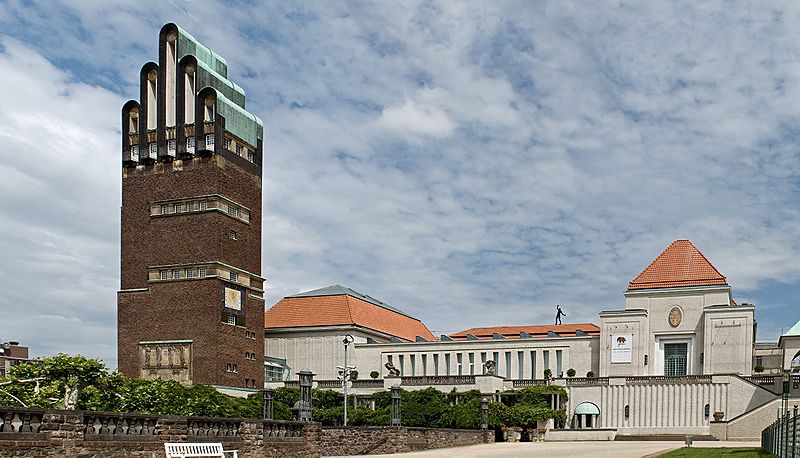 In honour of the marriage between Grand Duke Ernst Ludwig and Princess Eleonore of Solms-Hohensolms-Lich in 1905, the city wanted to give the couple a gift. A previously expressed desire of the Grand Duke’s to have an observation platform on the Mathildenhöhe was subsequently approved by the City Council in 1906. The Wedding Tower designed by architect Joseph Maria Olbrich was thus erected in 1907/1908. It is located next to the Darmstadt Artists’ Colony, which refers both to a group of Art Nouveau (Jugendstil) artists as well as to the buildings in Mathildenhöhe in which these artists lived and worked. 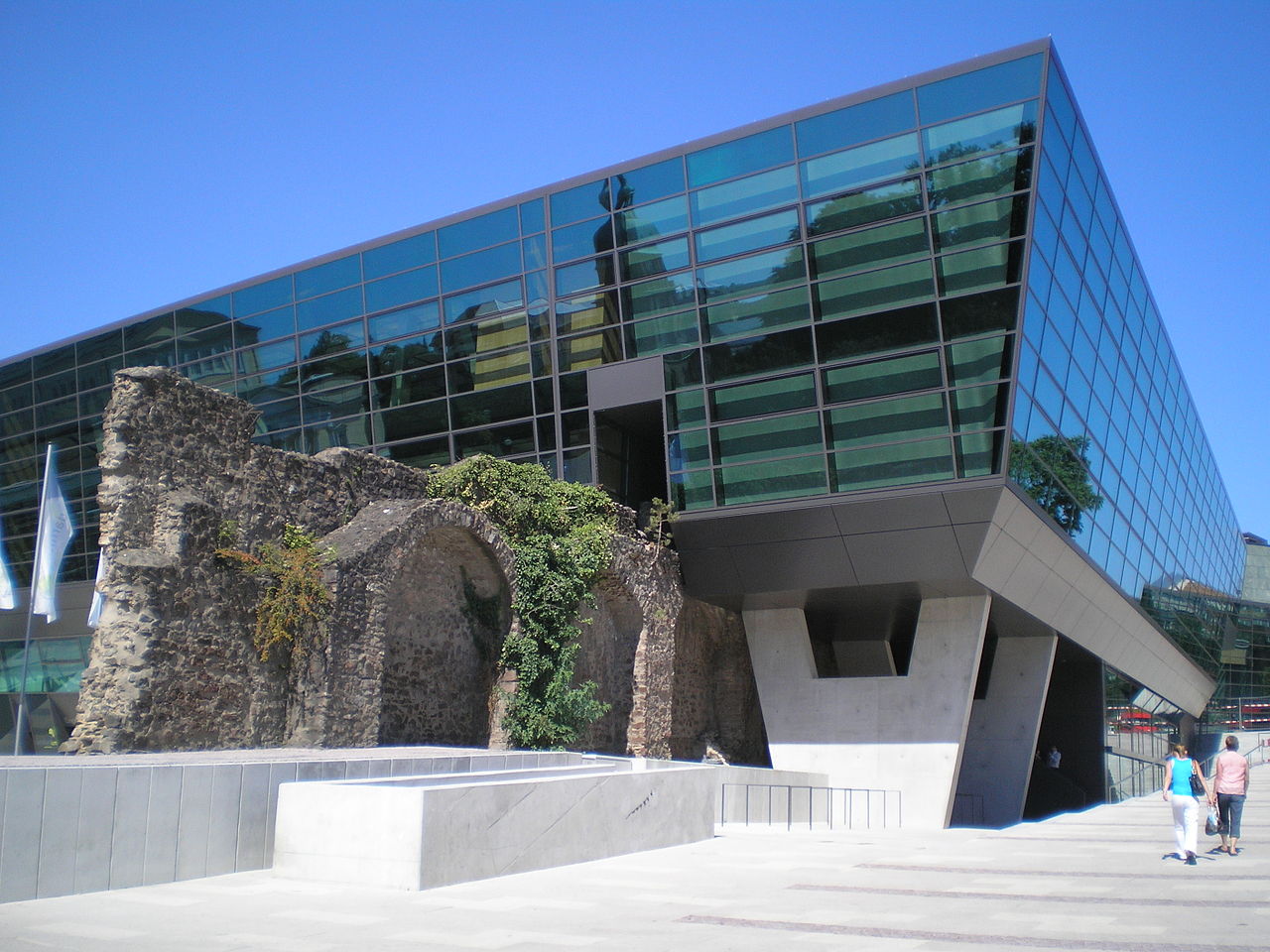 In downtown Darmstadt, the Darmstadtium congress center is located in the immediate vicinity of the castle. The naming was inspired by the chemical element discovered in Darmstadt in 1994. The building complex has a total of 20 conference and seminar rooms and is used for international scientific congresses, conferences, seminars, receptions, annual general meetings, cultural and concert events. Remains of the medieval city walls as well as parts of a historic defense tower, which was discovered during the construction work, were integrated into the "Darmstadtium" and form a successful contrast to the modern architecture of the house. 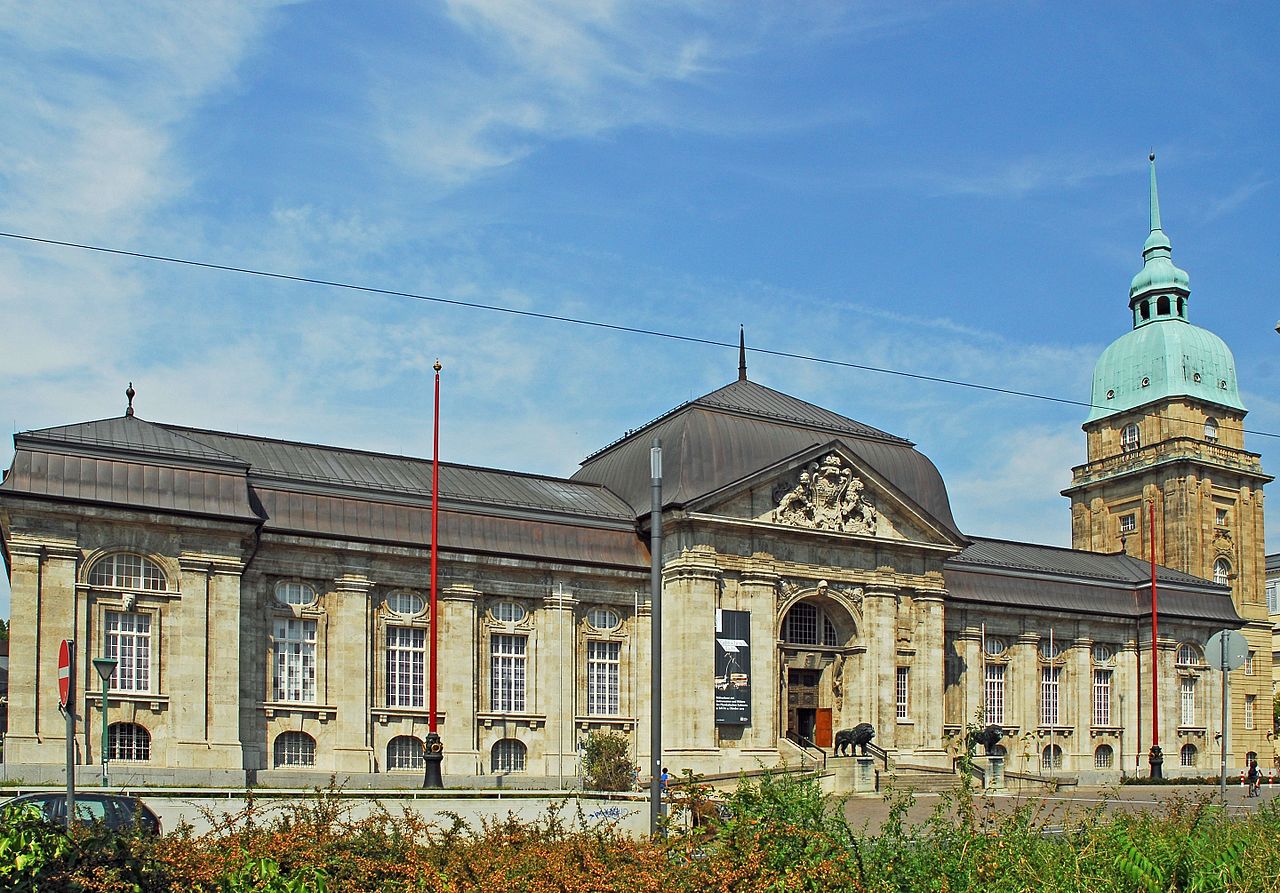 Hessisches Landesmuseum is a multidisciplinary museum. It is especially noted for its natural history collections, for instance fossils from the nearby Messel pit and a historic American mastodon purchased by the Darmstadt naturalist Johann Jakob Kaup. It also features an important arts collection, including Pieter Brueghel the Elder's The Magpie on the Gallows. After major renovations, it has reopened on September 13th 2014. 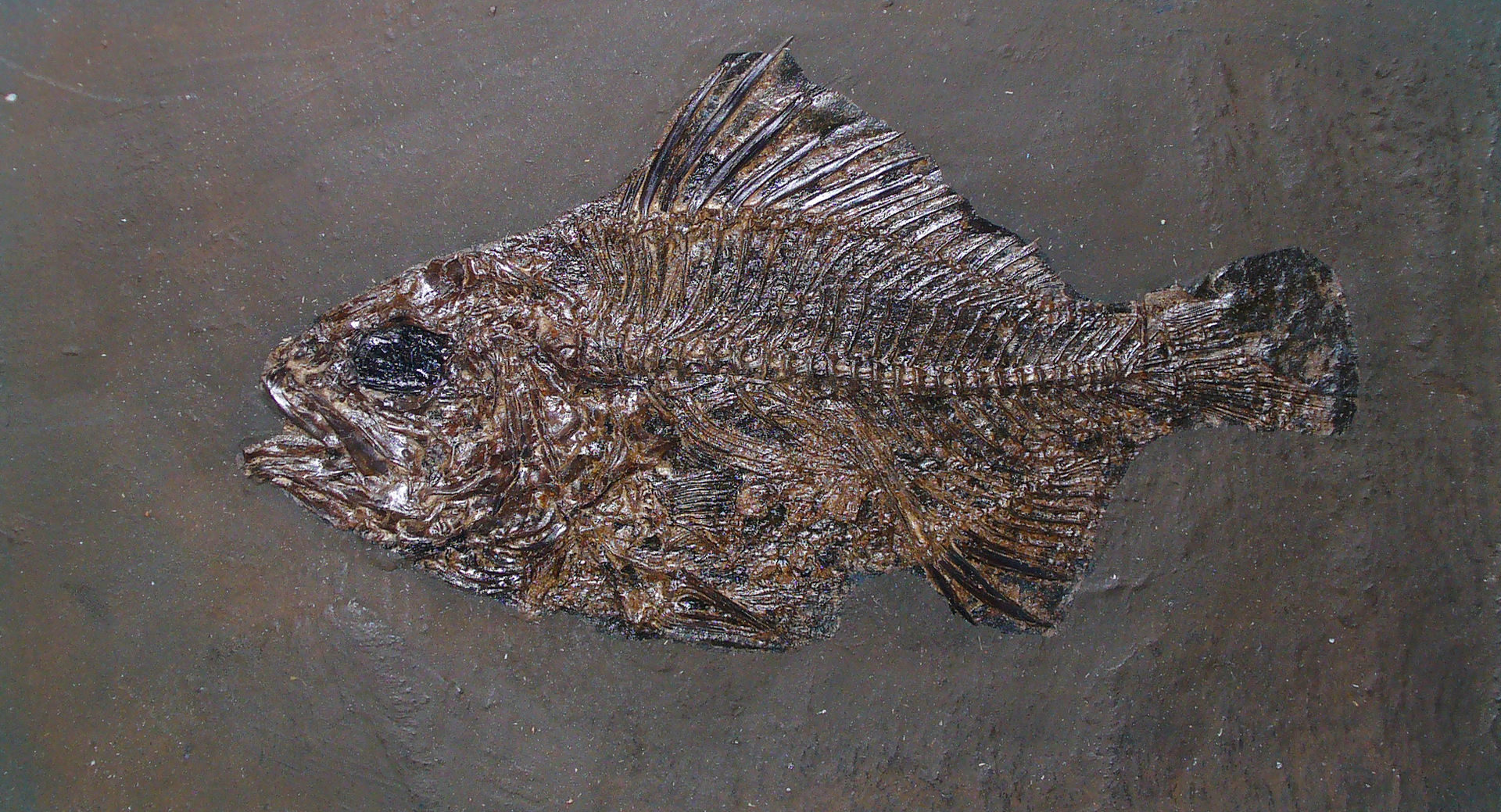 The Messel Pit is a disused quarry near the village of Messel, about 10 km northeast of Darmstadt. Bituminous shale was mined there. Because of its abundance of fossils, it has significant geological and scientific importance. After almost becoming a landfill, strong local resistance eventually stopped these plans and the Messel Pit was declared a UNESCO World Heritage site on 9 December 1995. Significant scientific discoveries are still being made and the site has increasingly become a tourist site as well. 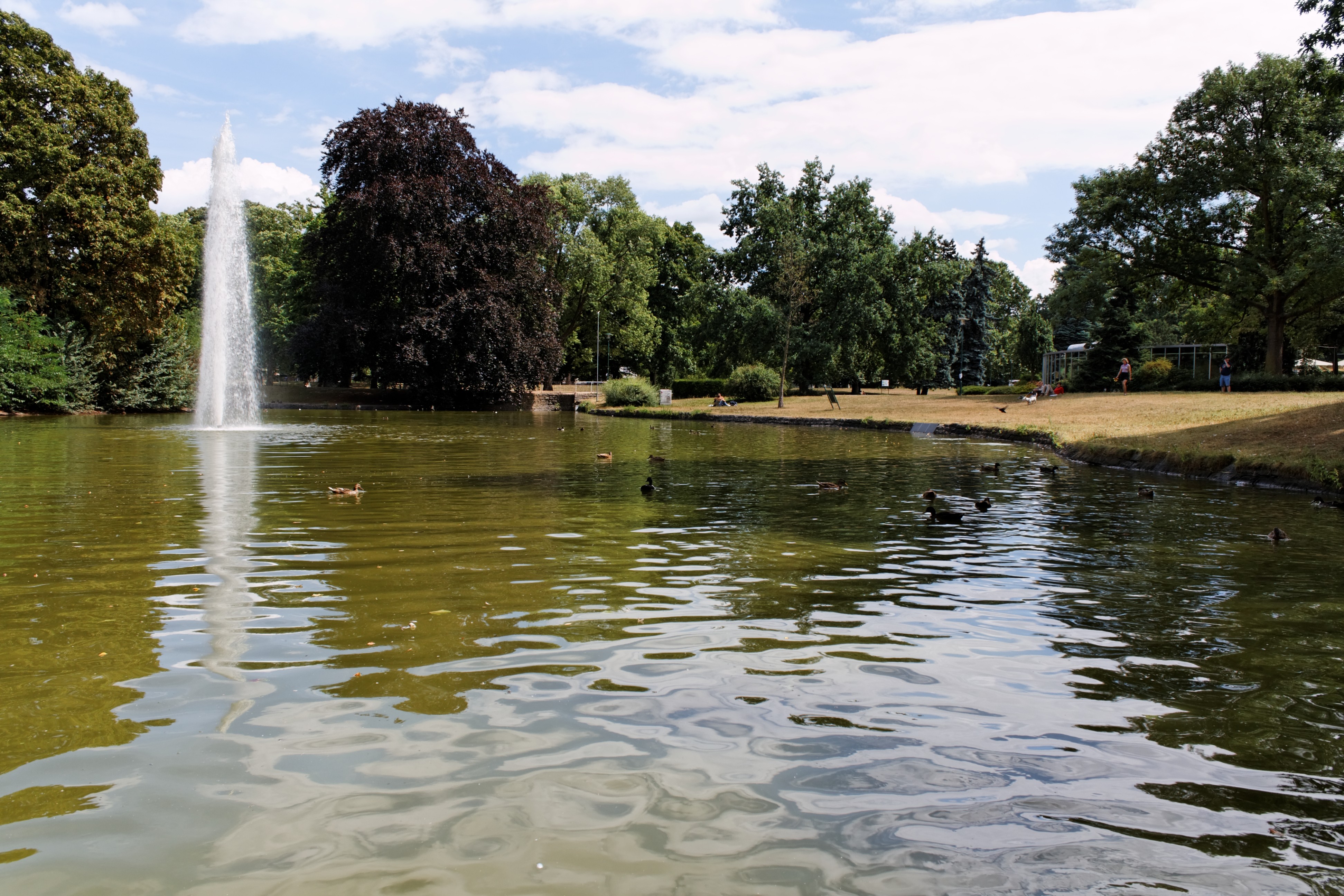 The Herrngarten is a green lung in the heart of the city. This largest and oldest park in Darmstadt was built in the 16th century by bringing together three larger and several smaller gardens. Countess Karoline decided the conversion into an English park in 1766. In 1811, Grand Duke Ludewig I opened the Herrngarten for all people and since then, it has become a popular destination. The green expansive park meadows invite you to picnic, read, laze or meet friends. Two spatially separate playgrounds are an age-appropriate offer for the youngest. A small pond contains the largest fountain in the city. Some monuments in the park such as the tomb of Countess Karoline, the veteran monument, the Goethe monument and the memorial stone for Princess Elisabeth are worth seeing. Beer garden atmosphere is offered in a café with outdoor catering in the middle of the park. There is a small music pavilion in the café grounds, where promenade concerts take place mostly in summer. 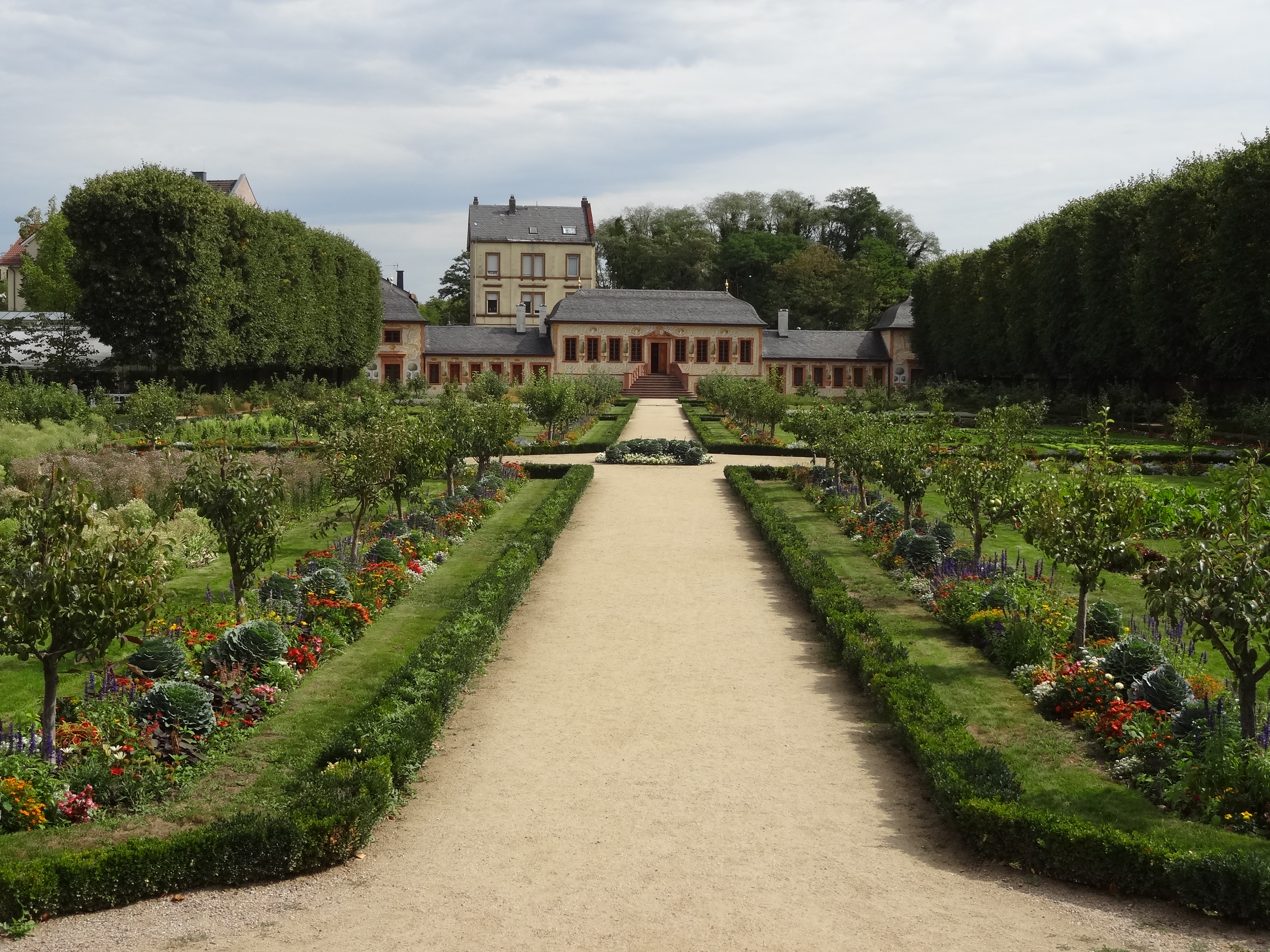 The Prinz-Georg-Garten lies at the north-eastern end of the Herrngarten, surrounded by a wall. It can still be experienced today in its original state - a typical Rococo plant with lawns, borders, fountains and sundials. This is how the former Herrngarten could have looked like when it was still traditionally combining pleasure and functional gardening. There are dozen gardeners here all year round. It grows potatoes, carrots and kohlrabi, mint and lavender bloom and the flawless crop are offered for sale. 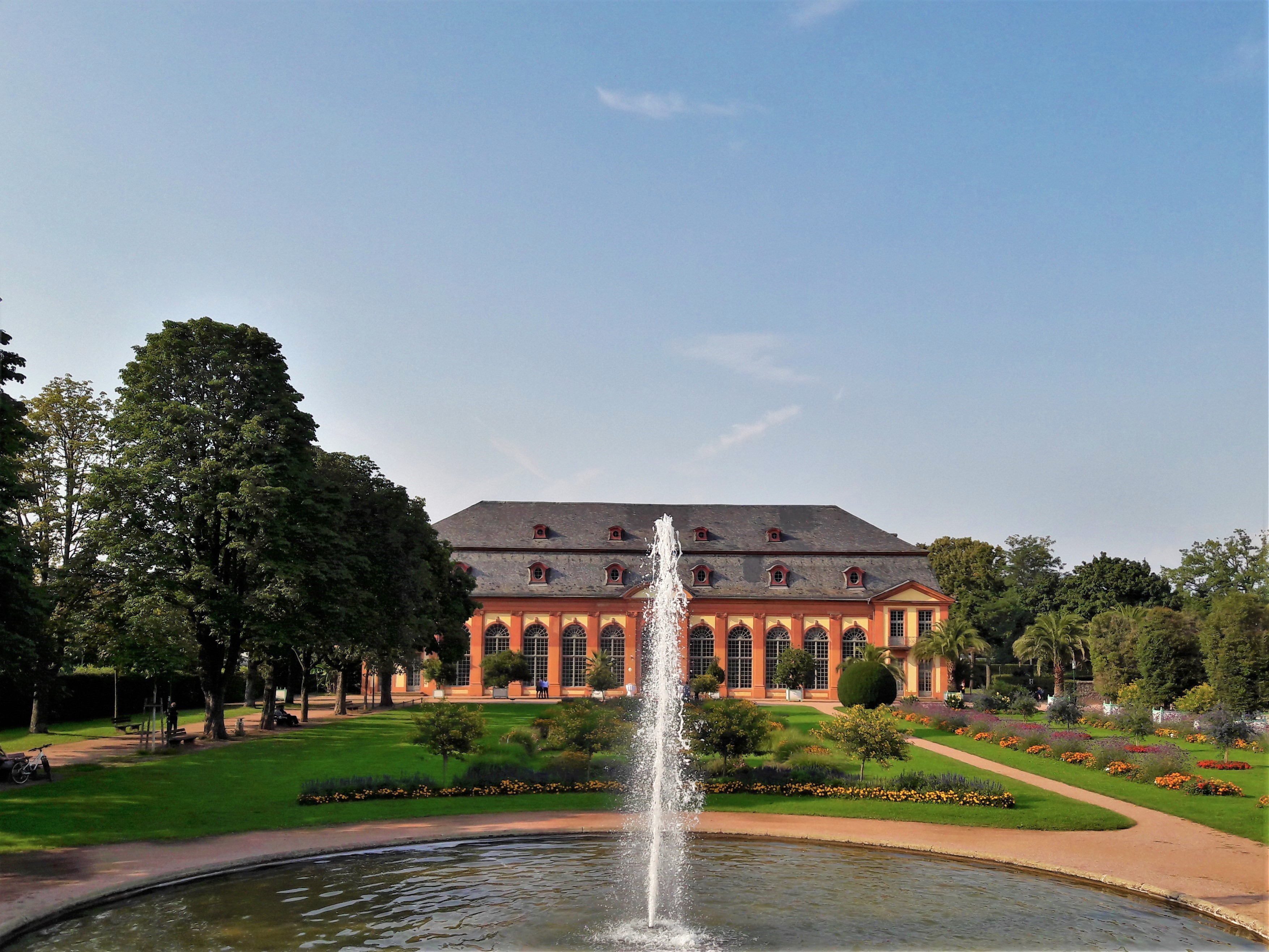 The Orangerie Park was designed by the Palatinate court gardener J. K. Ehret from Heidelberg. The symmetrical Baroque complex with its wide axes and fountains is surrounded by avenues of trees and consists of three levels. In summer, when the tropical fruits line the parking paths again in their large tubs, the facility lives up to its name and offers a Mediterranean flair in the middle of Darmstadt. The park was once the winter home for Sardinian or Sicilian orange trees. It was built from 1719 to 1721 to designs by the famous architect Rémy de la Fosse. Today, the baroque building serves as a venue with adjoining restaurant. The plants spend the winter in a new greenhouse, which is also used by the Neue Bühne as a rehearsal and performance space in summer. 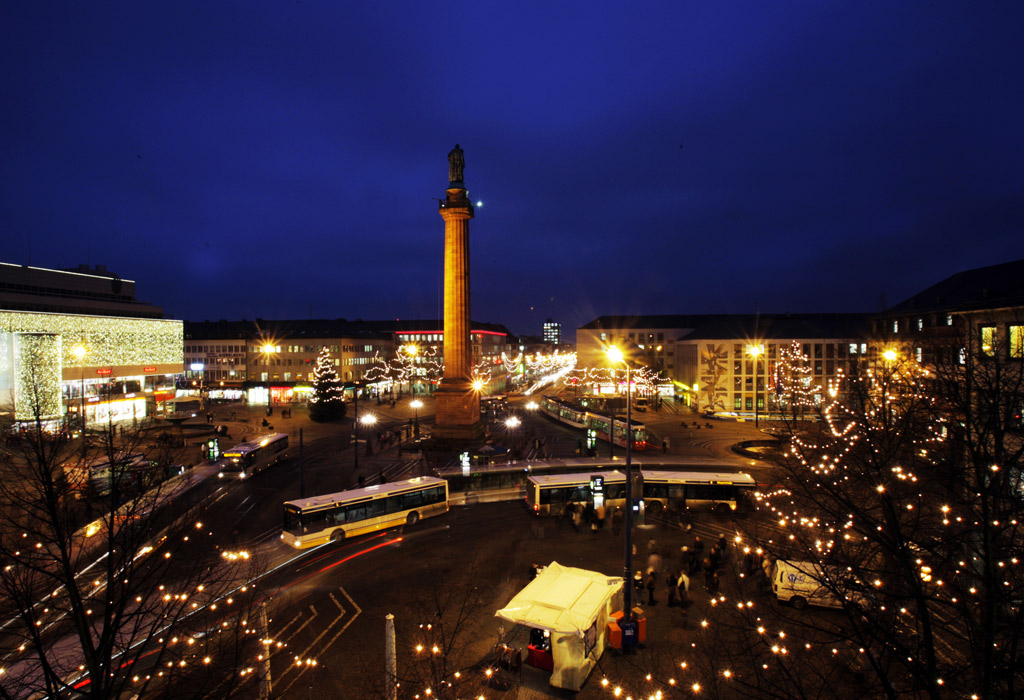 Darmstadt's lively nightlife attracts night owls with a wide range of attractions suitable for every taste and age group. Darmstadt offers a wide selection of nightclubs, bars, pubs, cinemas, theaters, restaurants, cafes, beer gardens and many other venues to go out on weekends or even during the week. Whether with cold beer or hot mulled wine, there is always something going on in Darmstadt. More information are available here.

► 2019-02-11: Registration now open
Registration for the symposium is now open. Information about the registration and a link to the registration site is available.
► 2019-02-10: Information about TaPaSCo tutorial available
ARC 2019 will feature a tutorial about the open-source TaPaSCo framework on Thursday afternoon.
► 2018-11-22: Deadline Extended
Due to popular demand, the paper submission deadline for ARC 2019 has been extended to December 7. We will not be able to offer any further extensions beyond that.
► 2018-11-01: Second CFP
The 2nd CFP announces the Program Committee and the planed Tutorials.
► 2018-10-18: Submission open
Manuscripts can now be submitted as described in the author guidelines.
► 2018-09-11: Special issue confirmed
Extended versions of selected papers are invited to a special issue of Springer’s Journal of Signal Processing Systems.
► 2018-08-30: CFP published
The CFP topics have been published.
► 2018-08-22: Deadlines Fixed
The deadlines for paper submission, author notification, and camera ready submission are available.
► 2018-07-31: Hotel rooms reserved
A number of nearby hotel rooms with preferential prices are available.
► 2018-06-27: Schedule changed
The conference date was shifted by one week.